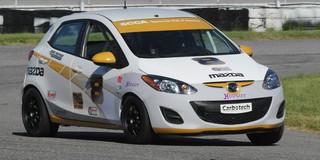 This weekend’s event, fourth on the adjusted Hoosier Super Tour schedule this year, had a unique look in the paddock as participants wore facial coverings and adhered to social distancing etiquette currently required due to the COVID-19 outbreak. But action on the 1.65-mile, seven-turn circuit was the same as any other SCCA race weekend.

Wiese for the Win: It was the Spec Racer Ford Gen3 field who officially restarted the Hoosier Super Tour’s season Saturday afternoon with a 25-minute race. Polesitter Richard Wiese led flag to flag, but not without a lot a pressure from Justin Claucherty, Bobby Sak and Grant Vogel. After the race’s midway point, Sak and Vogel dropped off the lead duo, but had a fantastic battle lap after lap for third, with Sak ultimately claiming the last spot on the podium.

Up front, Wiese was being hounded by Clacherty. On several occasions, Clacherty looked as if he could make a move for the lead as the two shot into turn one. However, Wiese held strong to take the win in the No. 35 Thank You Race Volunteers!/Hallett Race Shop SCCA Enterprises SRF3 vehicle.

“This is a busy track, and these cars are just about too fast for it,” Wiese joked. “Justin raced me really fair the whole race. Once traffic helped me break the draft, I was able to pull a little gap and be comfortable the rest of the way.”

Keeping the Momentum: The second race session Saturday featured Spec Miata (SM) and B-Spec cars. It was Jim Drago who led SM to the start, and he managed to develop a pretty solid lead over the first couple laps. But competitor Kyle Greenhill didn’t quit and stormed back to get right on Drago’s tail, bringing with him Jason Knuteson in third.

Greenhill was ultimately able to make the pass on Drago, but couldn’t shake the veteran. On the last lap, Drago gave Greenhill a little bump coming through one of the last turns. However, Greenhill was unshaken and brought his No. 42 Mom, Thank Her/Advanced Autosports Mazda Miata across the finish line in first.

“Jim tried to get past me, it was awesome,” Greenhill said about the last lap maneuver. “He tried to get to the inside on the last corner coming onto the straight. It just didn’t work out for him.”

B-Spec racers easily matched the excitement produced by Spec Miata. Rick Harris got to the front early, but was later passed for the lead by Chris Taylor, both driving Mazda 2 race cars. After a couple more trips around the circuit, it was Harris back in front. Taylor, however, wouldn’t let Harris relax the rest of the race, filling the leader’s rearview mirror at every opportunity. But it wasn’t enough as Harris held tight for a win in the No. 8 Jesse Prather Motorsports/Mazda Motorsports/Hoosier sponsored car.

“That was incredible,” Harris said about his B-Spec win. “It’s a little emotional because this is the first time I’ve had a win in a long time at a Hoosier Super Tour. I really didn’t expect this, but this is great. We’ve had a great time.”

The Zekert Factor: Saturday’s production race group saw Jesse Prather steam away to an E Production win in the No. 34 Jesse Prather Motorsports/Hoosier/Carbotech BMW Z3 car. In F Production, Sam Henry claimed victory in his No. 37 SpringfieldDyno/Mazda/Hoosier Miata. The other two car classes in the race group, GT-Lite (GTL) and H Production, found themselves impacted by one Peter Zekert.

In a Nissan 200SX, Zekert took the lead early in GTL. He looked to have things under control until lap 13 when his car began to slow, and he pulled into the pits a lap later. That gifted the lead, and later the win, to Michael Lewis in the No. 132 Goodyear Mazda RX-7 car. Incidentally, Lewis took the same car to victory in GT-3 later Saturday, and also claimed the GT-1 win driving his No. 12 Goodyear Jaguar XKR.

Meanwhile, in H Production, Steve Sargis and his No. 18 Carbotech Triumph Spitfire were making their way to victory in the 25-minute race. Earlier in the day during qualifying, Sargis had to pull his car to a stop just past the start/finish line on the main straight after his car experienced a fuel pump problem. Back in the paddock, Sargis was able to grab a replacement part from a fellow competitor, that being Peter Zekert. That borrowed fuel pump pushed Sargis to victory. Such sportsmanship isn’t rare in SCCA Road Racing, but it should still be appreciated when it happens.

Finally, Back to the Party: The traditional Hoosier Super Tour All Participant Party was more special than usual Saturday evening. While things were a little different thanks to COVID-19, everyone agreed it was great to see friends again, even from a short distance. One thing remaining the same is that the Hoosier Super Tour will get back underway Sunday morning with another round of qualifying at World Wide Technology Raceway before a second day of competition commences, this time with 35-minute or 31-lap contests. Follow all the action live at www.scca.com/live.