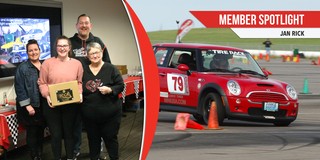 Imagine spending 40 years as an active member of the Sports Car Club of America. The memories, the stories, the fun activities, and the friendships. Then, imagine gathering two of your best friends for a fall vacation to laugh and share all of those stories with.

That, readers, is how Jan Rick, Carol Cohn and Susan Anderson spent several days last October. The stories that could have been told have changed this Club for the better for years and years to come.

Cohn has been a regular in the St. Louis Region management for years, building a reputation as a leader off the track and one fantastic organizer of the Region’s banquets. Anderson has attended every single Solo Nationals (and has had plenty of success while there!).

For Rick specifically, there are so many stories. We could talk about getting her start with autocross as a single mom and getting up to speed quickly, earning five National Championships. We could discuss the growth of the St. Louis Region while she was in leadership, including as an RE. The fun she had working grid at Club Races, or all of the committees that she’s sat on through the years.

She, of course, would talk less about her own trip across the stage to collect her trophies and more about the joy and pride of seeing her family involved in the sport. Her son, Dave Whitworth, owns Solo Performance Specialties and has collected some hardware of his own. Her granddaughter has caught the bug, moving now from junior karts to CAM.

But Rick’s biggest impact on the world stretches beyond SCCA. Like so many others, she found herself in a situation she didn’t ask for, and turned it into a role she wouldn’t want but willingly embraced.

In 2011, she was diagnosed with breast cancer. A fighter in every sense of the word, she was well on her way to beating that when, two years later, they found Multiple Myeloma. Multiple Myeloma is a rare blood cancer that has no cure, but can be aggressively treated into remission. The chemo required for that caused neuropathy and Rick’s legs and below her knees and her fingers are now numb – ending her competitive driving days.

So what is there to do? Just give up? Of course not. Rick and her family took on fund raising efforts, collecting donations for Pedal the Cause to help others with cancer. Naturally, the St. Louis Region took up the cause with her, holding autocrosses, raffles, lunches and auctions – along with a simple donation button on the SPS website – to raise money.

Yes, this team of ladies have changed the life of many involved in the Club, and many more beyond what the Club offers. That’s why, when Jan Rick offers new members advice, she tells them to “have fun, make friends, and enjoy the cars – in that order.”